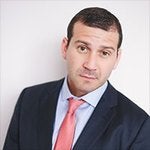 In addition to commercial matters, Mr. Bomsztyk maintains an active practice representing injured individuals in their personal injury claims as well as advocating for criminal defendants in appellate, post-conviction and immigration proceedings.